Art Schroeder Passes Away at age 77 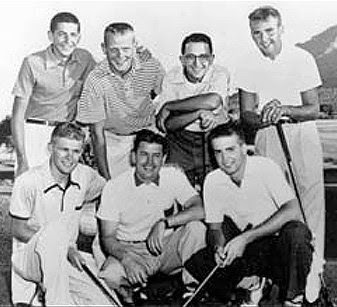 Art Schroeder, captain of the 1953 Stanford national championship team, passed away recently. Art was one of only a handful of Stanford golfers who won the individual conference championship as he did in 1953. Some of his Stanford golf friends shared their memories of Art.

"Art was a true friend and golf companion. We had many rounds together and I always marvelled at his putting and chipping. Because I was not very good around the greens, he tried to help me--out of pity. He told me to chip and putt without using my hands, but I apparently was too old to change. As a result money flowed from my pocket to his quite often.

He and Adie have been good friends to me and I enjoyed many pleasant meals with them. During his last days I saw Art several times and realized that he had gone through a lot of pain and suffering. He will be missed." Tom Connelly.

"We’ve lost a great guy and passionate golfer/competitor …two qualities that are a rare combination. My heart goes out to his wife and children/grandchildren. I know he loved them very much". Bill Krepick.

"I, too, am saddened by Art's loss. I feel fortunate to have played lots of golf with him over the years. It was always a pleasure to enjoy his company." Rich Strock.

"What a sad event....Art was such a special fellow. I certainly enjoyed his company. He will be missed very much by the Stanford golf community. With Wonderful memories of Art." Don Knott.

"Art was far and away the best short game player I ever encountered, and one of the real gentlemen of our game. I'll miss him." Dave Glen.

"I've known Art for only a couple of years---but it was great to be able to play golf with such a good guy. I imagine he is one of the few guys I knew who shot his age or close to it. My prayers go out to him, his family and friends. It will be an honor to attend his memorial service." Bill Arrillaga.

"Art was a great friend and often under-estimated golfer. With an outstanding pedigree--Pac Ten champ, member NCAA team champ--Art rarely missed a fairway and had an adept touch around the greens. Even in his last years, he could post a tournament round in the low seventies that revealed the depth of his ability.

Art was an intense competitor who knew the value of a dollar. He was not afraid to let you know, as his partner, that your contributions impacted his bottom line. I will not soon forget the match we played as teammates some years ago, when each of us was playing poorly. During the round, I missed 4 or 5 putts of less than 5 feet (which was hardly out of the ordinary for me), putting us down to our opponents by several holes. We came to the 18th hole with presses on the line and a chance to pull even, or close to it. Fittingly, my 3rd shot left me about 3 1/2 feet from the hole. A par would mean a win. Now, given my past performance during the round, the chances of my sinking this putt were less than negligible. I stroked the putt, didn't even scare the hole, and off to the side, Art groaned loud enough for all to hear, "Oh my God."

But my favorite memories of Art were on the practice putting green and 19th hole practice area. Art was nearly as fanatical as me in practicing the short game. Art unfailingly complimented me as a superior short-game artist, despite all on-course evidence to the contrary. We compared notes, theories, and recent results--always in good humor, comrades on a mission, all in the spirit of the joy of being on the green doing what we love.

I will miss him a lot." Steve Peters.

"I played about 6 or 8 rounds of golf with Art over the past 10 years. I always found him to be a pleasure to be around as he had a very kind manner, was very friendly to all and played at a high level. Although he was quite competitive and focused when he played, he also had a very open and warm side to him. I always asked him about his early playing days when he was one of the top college players around.

He never cared to dwell on the past, not wanting to brag about his golf, but it was clear that this period was very rewarding and fun for him. I asked him about the best players he played with and he mentioned Ken Venturi who he played junior golf with in SF. Art was always in the present as he worked to constantly hone his skills.

In the past 4 years I saw him most often at the driving range, always on the far side working away on his rhythmic, loose and long swing. He was frustrated that he had lost so much distance and worked tirelessly to try to get back a few extra yards. We discussed more than once ways that he might hit it farther and I remember talking him into changing drivers to the larger, lighter style of today. He would kid me later that I cost him money but that the new driver didn't add any distance.

I always came away from our interactions feeling good about Art and appreciating the man. He always had kind words for me and my game. I miss seeing him and playing with him and also wish I had sat down with him for an interview about his great golfing past so that it could be preserved with the great history that is Stanford men's golf." Bob Stevens.

Our thoughts and prayers go out to his family that shares the following:

He was born August 11, 1931 to Rose and Arthur Schroeder in San Francisco CA. He attended Abraham Lincoln High School and Stanford University where he was a member of Kappa Sigma fraternity and captain of the 1953 men's golf team NCAA champions.

In 1954 he married Adrienne Faber while serving in the U.S. army. Upon completion of his military service he worked with his father at AH Schroeder Co. in the fur industry. Art was an avid golfer at Stanford Golf Course and was club champion and senior champion. His love and support of Stanford continued throughout his life.

Donations in memory of Art may be made to Stanford Men's Golf Team, Stanford University Department of Athletics, Stanford, CA 94305.
Posted by Bob Stevens at 5:54 AM