A very sad day as Bob Rosburg passes away 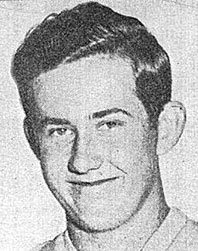 Bob Rosburg (left) passed away Thursday at the age of 82. Lyman Van Slyke and I felt fortunate to have met him last year to conduct an extensive video interview of his remarkable life --- the complete interview and other information can be found at http://stanfordmensgolf.com/stanford_greats/bobrosburg.htm. Here is the first of 5 parts of that interview:

A three-year Stanford letterwinner from 1946-48, Rosburg was also lettered in baseball and basketball during his collegiate days on The Farm. A 10-time winner on the PGA Tour, Roseburg won the 1959 PGA Championship at the Minneapolis Golf club in St. Louis Park, Minn., when he overcame a six-shot deficit to edge out Jerry Barber and Doug Sanders with a closing round 66.

One of the most consistent players on the tour, Roseburg won the Vardon Trophy in 1958 for lowest average score (70.11) on the PGA Tour. He enjoyed a career year in 1959 when he finished seventh on the money list and was named to the Ryder Cup team after winning the PGA and finishing second in the U.S. Open. In 1969, he won the PGA Club Professional Championship.

His last tour victory came in 1972 when he won the Bob Hope Desert Classic by one stroke over Lanny Wadkins, making him the oldest champion in the tournament's history.

Rosburg's connections with the Hope went beyond his 1972 victory. Rosburg, who lived at La Quinta Country Club, is credited with devising the mechanics of the Hope's five-day, four-course format. Approached by tournament organizers in 1959 about how a tournament with 128 pros, 364 amateurs and four courses might work, Rosburg was given a bungalow at Bermuda Dunes Country Club to work out the details. Three days later, using only a legal pad and colored pencils, Rosburg emerged with a format that is still used by the tournament today.

Following his playing career, Rosburg joined ABC Sports full time in 1974 and worked as an analyst for the network for three decades, perfecting the art of the roving reporter. He will be fondly remembered for his storytelling abilities and for his catch phrase, "He's got no chance, Jim," which he would utter whenever he encountered a golfer who had hit his ball into a seemingly impossible position. The "Jim" is in reference to the late ABC commentator Jim McKay.

"I haven't said, 'He's got no chance' in four years," Rosburg said in a 2002 article for Golf Digest magazine. "I have nothing against the expression. It's just that players nowadays always have a chance."
Rosburg is also credited with helping ABC hire Judy Rankin, who was the first full-time female golf commentator to cover men's events, including the major championships.

"Bob Rosburg represented the best in golf as a player, champion, gentleman and as the voice who brought viewers the best insight on what it was like for his fellow professionals to perform inside the ropes," said PGA of America President Jim Remy. "We will dearly miss being able to help Bob celebrate this summer the 50th anniversary of winning the PGA Championship and our thoughts and prayers go out to his family. He will forever be in our hearts as a true Champion."

Born in San Francisco in 1926, Rosburg played golf as a junior at the Olympic Club and at the age of 12, faced then-retired baseball hall of famer, Ty Cobb, in the first flight of the club championship, beating the Georgia Peach, 7 and 6.

Rosburg was a standout baseball player at Stanford during the 1940's and almost chose baseball as a career over golf. He graduated from Stanford in 1949 and turned professional in 1953.

Rosburg is survived by his wife, Becky and their children, Robert, Deborah and Bruce. There were no immediate plans for services.
Posted by Bob Stevens at 8:24 PM