Jim Seki ('02 All-American), had a solid tied for 7th finish at the recent Canadian Tour event Seaworth, Ontario. Jim shot rounds of 67-68-69-68 to finish 8-under and one shot out of 4th place and seven shots behind the winner. Here are complete results: http://www.cantour.com/leagues/cantour_leaderboard4.cfm?leagueID=11762&clientID=3776&link=Cantour

Rob Grube ('08) played a Hooters Tour event last week and finished tied for 23rd with rounds of 67-71. Here is the complete leaderboard.

Here's a video interview of Joel Kribel ('99 4-time All-American) before playing in a Nationwide Tour event in Livermore at Wente Vineyards. The interview was conducted in April.

Posted by Bob Stevens at 1:51 PM No comments: 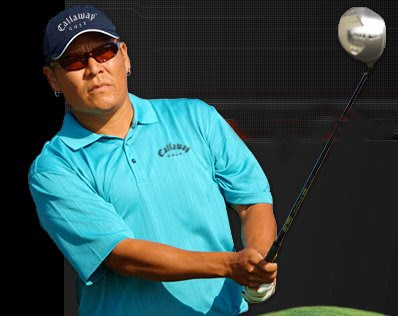 Stanford grad Notah Begay III ('95) hosts the inaugural Notah Begay III Foundation Challenge is expected to draw about 2,000 fans to Turning Stone Resort’s Atunyote course on Tuesday to watch a skins game between some of the PGA Tour’s top players.

Begay, the golf ambassador for the Turning Stone Resort Championship, has arranged the charity event to raise money and awareness for his Native American causes.

Here's a complete news release about the event: http://www.notah.com/press-room/in-the-news/206.
Posted by Bob Stevens at 8:48 AM No comments:

Recent graduate Rob Grube ('08), a 4-time All-American, completed play at his first PGA Tour event with a final round 68 to tie for 14th at the Reno-Tahoe Open played at the Montreux Golf & Country Club in Reno, Nevada. His 7-under 281 total earned Rob $48,000 in the event where he received a sponsor's exemption.

Here's the complete leaderboard for the tournament.

After beginning the tournament with a solid 2-under 70, Rob was struggling on his second round as he was 4-over for his round through 15 holes, 2 strokes above the cut line of even par. Grube made clutch birdies on the tough 16th and par five 17th holes, however, to finish his round of 74 barely making the cut line.

On the weekend, he shot rounds of 69 and a final round of 68 to finish strong, as he shot the lowest weekend total in the field (tied with one other player). Posted by Bob Stevens at 8:39 AM No comments: