Recent Stanford graduates Rob Grube ('08) and Zack Miller ('07) have been invited to play in the 2008 AT & T Pebble Beach Pro-Am as was announced by the Monterey Peninsula Foundation.

Adding a local flavor to the event, Grube is a graduate of Monterey's Stevenson School and was a 4-time All-American at Stanford as well as being named Pac 10 Player of the Year. In 2007, he led the Cardinal to the National Championship while finishing third individually. In 2008, the Illinois native captained Stanford to a second place finish, losing only to UCLA by a stroke.

Miller was a two-time All-American at Stanford and captain of the 2007 national championship team. Zack has been playing professionally in Asia as well as on mini-tours in the US. For Zack after a frustrating up and down year the invitation was like a wonderful Christmas present. He is quoted in an article in the Marin Independent Journal that "It is really the pinnacle of a golfer's career: To have status on the PGA Tour, the best tour you can be on if you're a golfer," Miller said. "Just having a week out there knowing that you started this game when you were seven and it's come all this way. It's going to be amazing being able to put forth your best effort and look at the scoreboard and see your name against some of the guys you have been following on TV for so long."

The 2009 tournament is slated for Feb.9-15 at Spyglass Hill, Pebble Beach Golf Links and Poppy Hills.
Posted by Bob Stevens at 9:25 AM No comments: 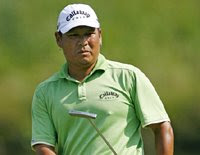 Begay fired a 5-under 67 (the low round on the tougher PGA West Stadium course) to tie for 11th and earn his PGA Tour card once again. Showing a flare for the dramatic, Notah birdied 3 of his last 4 holes to move 2 shots under the cut line. His last two rounds of 63-67 (14-under par) were the best in the field of 163 players. Alex Aragon shot a final round 71 to tie for 87th place, leaving him with non-exempt status on the Nationwide Tour. PGA Tour story on Begay's qualifying tournament.

Final results can be found here.

PRIOR POSTING:
Notah's brilliant 63 in the next to last round (see Golf Week article) jumped him into contention as he is tied for 21st after rounds of 72-70-69-71-63 (-15). Begay plays on the tougher PGA West Stadium course in the final round and will likely need to shoot 69 or lower to gain one of the 25 exempt PGA tour spots.

The final stage is held over 6 days and 108 holes and is considered the most grueling test in golf.
Posted by Bob Stevens at 5:54 AM No comments: