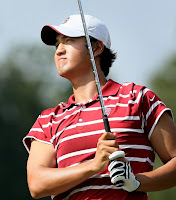 
In other alumni news, Alex Aragon (2000), Zack Miller (2007) and Joseph Bramlett (2010) opened their 2012 campaigns on the Nationwide Tour at the Pacific Rubiales Colombia Championship in Bogota, Colombia.  Aragon finished 65th, earning $1,650, after rounds of 71, 70, 74 and 75 for a 4-day, 6-over par total of 290.  Miller and Bramlett missed the 2-day cut.  All three are scheduled to play March 1st-4th in the next Nationwide Tour event, the Panama Claro Championship in Panama City, Panama.
Posted by Pat Phillips at 1:54 PM No comments:

Alumni Update: California Coast and Beyond

Four Cardinal, Notah Begay (1995), Tiger Woods, Zack Miller (2007) and Joseph Bramlett (2010), competed in this past week's AT&T Pebble Beach Pro-Am.  Woods grabbed headlines as he tried to claim his first PGA Tour title in over two years.  Woods, playing alongside eventual winner Phil Mickelson, struggled on Sunday with a 3-over par 75 to finish t15.  Bramlett, seeking his first PGA title, momentarily climbed into 3rd on the leaderboard by reaching 11-under on Saturday.  Unfortunately, Bramlett struggled in the later stages of Saturday's round and closed with a 75 Sunday to finish t40.  Both Begay and Miller missed the 3-day cut.

In other alumni news, Will Yanagisawa (1995) and Dodge Kemmer (2009) are grabbing attention overseas.  Yanagisawa (pictured below) won this past November on the China PGA Tour in Chongqing, China closing with a final round 67 to win by one. 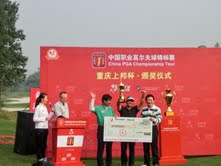 Earlier this year Kemmer (pictured below) fired rounds of 66, 70, 69 and 71 to finish t2 in Asian Tour Qualifying School in Thailand.  Kemmer's 2011 and 2012 professional golf travels have taken him around the world competing in events in North America, Africa, Europe and Asia.  In his most recent event, the ICTSI Philippine Open, Kemmer struggled to a t74 finish. 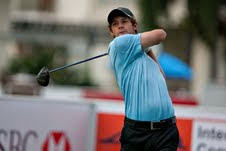