Zack Miller ('07) wins again, his 2nd consecutive victory on the Gateway Tour's Desert series in Scottsdale Arizona over the summer. The latest victory was by 3 strokes at the McCormick Ranch Golf Club in Scottsdale (Aug 19-21) as he shot 69-64-67.

Zack has been on a roll since the end of April with a tie for 2nd, followed by a tie for 22nd and two victories. In these 4 events he has won about $33,000. Zack was a 2-time All-American in his days on the Farm.

His results in 2009 on the Gateway Tour can be found here --- http://www.gatewaytour.com/home/home.aspx.
Posted by Bob Stevens at 8:05 AM No comments: 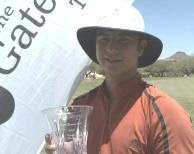 Zack Miller ('07), two-time All-American at Stanford, has won his first professional event thanks to a blazing final round 63 on the Gateway Tour at Troon North in Scottsdale. Now in his third year as a pro, the 25-year old San Rafael California native had rounds of 65-69-63 for a 2-shot victory worth $8,500.

In a story from the Gateway Tour's website Zack relates the following:

As he states, it was perhaps some added confidence from Monday Qualifying and making the cut in last week’s Cox Classic of Omaha that gave him the boost of a winning week back on The Gateway Tour.

“There’s no doubt I think I was feeding off of the energy from (The Cox Classic, where he tied for 63rd) last week, even though I didn’t have the best weekend up there,” said Miller, “but, I definitely came back to The Gateway Tour this week with more confidence and it carried through all week, which was great.”

“I think it’s just one of those things being in the bigger events that gives you confidence because you realize those guys out there aren’t that much different from you,” he added. “It’s just that realization of being in that arena that helps you.”

In his last Gateway Tour start -- Desert Spring No. 8 (Prescott Lakes) -- Miller tied for 2nd after losing a four-way playoff to Nick Mason. With a heartbreaking loss in that event, and with another bout in contention earlier in the season -- a T3 at Desert Spring No. 6 (Vista Verde) -- he’s pleased to finally come through in the clutch with the “W.”

“It’s just a cool thing because this is my first pro win,” said Miller. “I’ve been knocking on the door a couple of times in the past, especially with (the playoff loss at Prescott Lakes), but it’s just been a great week and this feels great.”

For complete scoring results click go to http://gatewaytour.bluegolf.com/bluegolf/gway9/event/gway947/contest/1/leaderboard.htm. Note that by clicking on Zack's name in the leaderboard you can see all of his results on the Gateway Tour.
Posted by Bob Stevens at 6:35 AM No comments: