Notah Begay ('95) and Alex Aragon ('01) both move on to the final stage of the PGA Tour's qualifying school. Tour veteran Notah fired a blazing 65 last round that included an eagle and five birdies (he finished with birdies on 17 & 18) to finish tied for 8th at the PGA's 2nd stage qualifier in Lantana, Texas while Alex finishes tied for 3rd after a final round 69 at Beaumont, CA.

Notah , seemingly had little chance after three rounds which left him 6 shots off the cut line. But his tournament low 65 leapfrogged more than 30 players and allowed him to continue his quest to return to the PGA tour after rounds of 71-77-74-65. Notah has had a long injury plaqued battle to retain the greatness that was once his as a top 10 player and multiple winner in the golf world. Here's the full leaderboard for the Lantana qualifier.

Joel Kribel ('99) missed the qualifying cut by 3 strokes in an earlier second stage qualifier at Kingwood, TX after rounds of 75-72-69-71. Here are complete results from the Kingwood qualifier.
Posted by Bob Stevens at 7:55 AM No comments:

Philip Rowe ('02) updates on his pro career in Europe

Editor's Note - Philip Rowe was an All-American in 2002 and has played in Europe professionally since leaving Stanford. 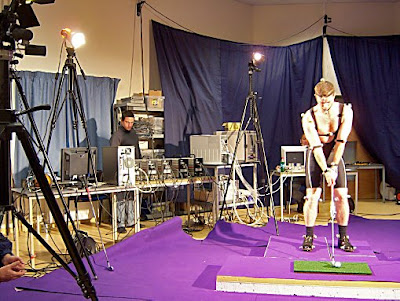 Special effects: The Biomechanics Laboratory at C.R.E.P.S. near Poitiers collects data upon my swing movements.

In the last update the news was of a near victory in Normandy and two tournaments later in at the Open Mirabelle d’Or it was a very similar story. In the club house at 17 under the par I could only wait and see how the others finished: A Frenchman finished with two birdies to earn a spot in the playoff and a Belgian also duly birdied the last to make it a three-way. Although I had the closest eagle putt of 6 feet it was the Frenchman who took away victory with his eagle putt from 40 feet!

More solid results were to follow at Stade Français (5th place) where I had the opportunity of playing with Jean-Francois Remesy (two time French Open winner) in the 3rd round, and, a sweet final round of 66 hurtled me up the field at Padova (7th place). Since then, numbers in the 60s have been somewhat illusive. Final rankings on the Alps and AGF-Allianz golf tours were 14th and 5th respectively.

On several occasions this season I put myself in position to win tournaments. Even including a less glorious round or two, my 2008 stroke average remains –0.5 (a personal best season in those terms). There was a really hot stretch where I shot a cumulative of 56 under the par for 23 consecutive tournament rounds. With such a level of performance, top finishes and wins are inevitable! Consult the “Stats Attached” section below to see more detail about my performance this season.

Two wonderful pieces of news arrived this week. Firstly, thanks to my AGF-Allianz Golf Tour final ranking, I have earned an invitation to play the Mauritius Open (12-14th December) and an occasion to compete amongst regular European Tour players there. Then, I also received an invitation to play a limited field event in La Reunion the week before Mauritius at the venue where I previously won in 2006. All in all my trip to the Indian Ocean from 1st - 16th December. I have no doubt that this will be a fantastic adventure both on and off the course and I can’t wait!

Before then I have two coaching courses that I will take: PGA Coaching Level 1 (Birmingham, 17-18th November) and “The Mind Factor” coaching diploma with Dr Karl Morris (Manchester, 22-25th November). The coaching qualifications will consolidate my expertise and activity within golf. They will also help me develop skills to progress certain projects that I look to intensify over the wintertime.

During the early part of this winter training period, I continue to undergo a thorough series of assessments that reflect multiple elements of performance in sporting activities and golf specifically. DreamGolf is a new company that has been set up locally to where I live in Poitiers and I hope to support and use it’s impressive structure of expertise. Various professionals are collecting data to measure particular components of my performance profile. Upon that data I will look to build a training programme in order to expand my personal capacities and increase the likelihood of a breakthrough next season.