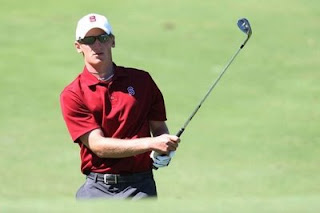 Exempt from 1st stage, Zack Miller (2007) and Joseph Bramlett (2010) will join Ziegler and Aragon in the quest for a 2012 PGA Tour Card.  Miller and Bramlett, both 2010 PGA Tour members, return to Qualifying School after finishing outside the top 125 on the money list.
Posted by Pat Phillips at 7:22 PM No comments:

«
1 of 2
»
Dodge Kemmer is a Stanford graduate with a degree in human biology. He studied pre-med. He has an uncle who is a physician. So is his uncle's wife. His parents are petroleum geologists.
Something tells me that if golf doesn't work out for Kemmer, he'll find a way.
So far, though, golf is his meal ticket. Not that he's eating at the finest restaurants; Kemmer, a 2005 graduate of Wichita Independent, is working through the maze that ultimately could lead to a nice career.
Or he might get stuck. It's too soon to tell.
Kemmer recently became a client of International Sports Management, a United Kingdom-based firm that represents four recent majors winners from Europe: Darren Clarke, Louis Oosthuizen, Rory McIlroy and Charl Schwartzel, along with Lee Westwood and a flock of others.
Kemmer, a former Stanford captain, was ranked among the world's top 20 amateur players and has spent much of 2011 playing professional on the Canadian Tour, having earned medalist honors and full exemption at the California Winter Qualifying School. He has two top-10 finishes in Canada this season and will start Q School in Dayton, Ohio., on Oct. 18 in his quest to play on the PGA Tour.
Last month, Kemmer won a Europro Tour event, the Integral Collection Classic, by five shots.
Kemmer, though, isn't stressing about his future. Talking to him gives a sense of his well-roundedness, a golfer who isn't defined by the game he plays.
"I don't think I'm a typical American touring pro,'' he said. "I've always expressed a lot of interest in playing golf in Europe and going abroad. It's definitely possible that I would try to play on the European Tour, which is something a lot of guys in the United States don't even consider. But when I turned pro, one of the things I wanted to do was use it as a chance to travel and do all the things I wouldn't be able to do if I had a more stationary job.''
That same uncle and his wife are avid bird watchers who have been to more than 100 countries, Kemmer said.
"I've never gotten into bird watching myself, but I would be willing to give it a try,'' he said. "It seems kind of cool.''
Kemmer's base is in Mountain View, Calif., near Stanford. He loves the serenity and beauty of his surroundings. He qualified for the Nationwide Tour's Wichita Open in 2010 but failed to make the cut.
Like most young golfers with professional aspirations, Kemmer is caught on the merry-go-round of emotions and disappointments, quelled at times by that one really good round or tournament.
He grew up playing in events against Topeka's Gary Woodland, who went to Kansas and might be the rookie of the year on the PGA Tour this season.
"He's always had a great game,'' Kemmer said of Woodland. "It's just a matter of being able to play well for that one or two months. There are so many guys who have the game to be out there on the PGA Tour. It's a matter of whether they're playing well at the right times.''
Kemmer said he chose to spend more time in Canada this year than on some of the mini-tours in the southeast because of the variety.
"When you're playing down there, the courses kind of look the same week after week,'' Kemmer said. "It's the same area and the same weather. The people in Canada were very friend and they come out and support those tournaments. And the courses were great, a little bit different every week.''
Whatever happens, Kemmer doesn't want to be a stranger to Europe. He was elated by ISM's decision to bring him aboard as a client and feels loyalty to the continent.
Kemmer's sister, Callie, is a standout golfer at Yale. His little brother, Riley, is a 6-foot-7 shooting guard at Collegiate and a potential Division I recruit.
Basketball is in the Kemmer family's blood; Dodge's grandfather, Howard Engleman, is an all-time great at Kansas.
"I'm sure Riley's height comes from my grandfather,'' Kemmer said. "I'm a little peeved that he got that.''
Kemmer got plenty, though. At 24, he has a killer golf game, a Stanford degree and a family heritage he is eager to live up to.
While at Stanford, Kemmer was part of a team conducting medical research on lupus, an auto-immune disease that most commonly attacks women and their skin, joints, heart, lungs, kidneys, blood and brain. He has been helping a Stanford Ph.D. candidate with a paper on the subject, which is nearly ready to submit.
"With my parents being geologists, science was always a high priority growing up,'' Kemmer said. "It caught my attention.''
This is a golfer with a back-up plan.