The below letter is from Stanford Men's Golf 2013 Alum, Andrew Yun.

Here is my second update of the the monthly newsletter.

April was one of the slowest months for the Web.com Tour. We only had two events for the month, the first being in Leon, Mexico and the second in Evansville, Indiana.

Leon was definitely an interesting place. On the drive to the hotel from the airport - about 45 minutes away - there was not much to see. But the clubhouse and the course was a another story.

The golf course was big, being about 7,600 yards. Big bunkers were well placed around the landing area of your drives off the tee. The fairways were large, but if the ball found one of these bunkers, it would create quite the challenge to even reach the green. All of the greens are slightly raised, with large slopes that cuts the green into two or three smaller sections. There were a lot of collection areas and false fronts and with the greens being extremely soft, controlling the trajectory as well as spin was paramount. A good shot could easily end up in a deep bunker or even water hazard if the spin wasn't controlled. Another thing that was a huge factor was the altitude. I am not quite sure how many feet above sea level the golf course was, but the ball was going about 8% further than normal in the mornings and 10% in the afternoons.

A good first round of 70 was followed by a sloppy 74 in the second round to make the cut on the number. I was the first to tee off in the morning on Saturday, about 15 minutes after sunrise. A solid round of 69 left me in the middle of the pack heading into Sunday. And Sunday, the putts started to drop. I did reach 8 under par before missing a short par putt on the 17th. But a round of 65 - the lowest of the day - gave me a backdoor T-8th finish. I hit the ball great all week just like I did in Bogota, another course with high altitude.

A look off the 11th green at El Bosque GC. 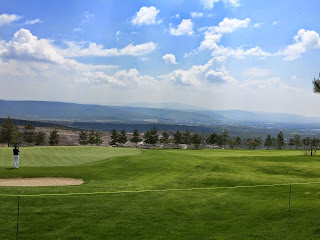 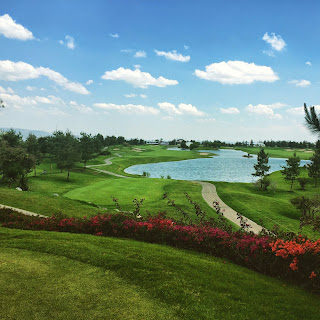 There was a week off before the next event in Evansville, Indiana. I spent a few days up in Seattle to see family and spend time with my grandma. I was looking forward to Evansville and getting to play Victoria National again. It was the site of the 2008 AJGA Rolex Tournament of Champions in which I finished 3rd, even after making a 10 on a hole! My caddie and I got to stay with a host, the Cheema family. They were some of the nicest hosts I've ever had and I just wanted to say thank you so much again!

The course is one of my favorites I've ever played. If you're not on top of every aspect of your game, you won't be able to score out here. The course has many native grass areas, hazards, deep bunkers, and good length. The closing 5 hole stretch is one of the hardest we'll ever play. It is definitely one of the toughest courses we will play all year. To back that up, the cut after two rounds came in at 4 over par. Unfortunately, rounds of 77-76 had me on the outside looking in. Four bad drives into the hazard or native grass cost me 6 shots. And a balky putter didn't help the cause. I only made 3 birdies for the two days, one coming outside of 4 ft. Although many professionals do not like hearing this, my scores weren't a testament to how I played. I felt like I played well and made a lot of good swings. However, I didn't have much momentum for the good shots that I hit. The breezy wind made me uncomfortable at times with my shot selection, which is an area that I will work hard on. But many positives to build upon from the week. It was a really fun week and my sister made it out for the tournament which is always a blast! On and forward to the next one!

The 14th hole at Victoria National. 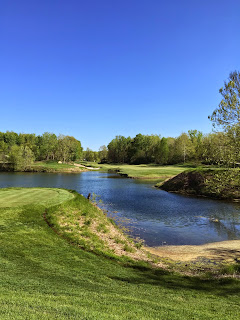 The 18th hole at Victoria National. 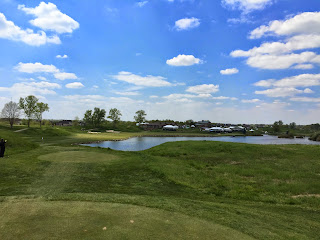 The 16th hole at Victoria National. 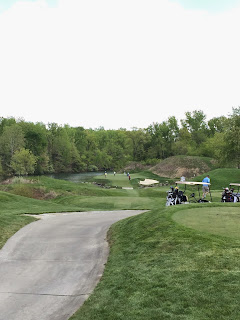 The next tournament on the schedule is the BMW Charity Pro-Am in Greenville, SC from May 14-17. It's a pro-am format, so a professional teams up with an amateur for the week. We play three different courses in the area for the first three days before the cut. Then the players play the host course, Thornblade, again on Sunday. You can follow online at http://www.pgatour.com/webcom/tournaments/bmw-charity-pro-am-presented-by-synnex-corporation.html

I hope everybody has a great week and a happy Mother's Day to all of our beautiful and loving mothers!!

Posted by Unknown at 1:51 PM No comments: