US Open Qualifying:
Dodge Kemmer '09 and Joseph Bramlett '10 were both successful in the Local Qualifying Stage of the U.S. Open last week and will continue on their quest to join current Men's Team Junior, David Chung, in the field of golf's elite at Congressional Country Club, Maryland, June 26-19, 2011.
Both shot rounds of 73 (+2) to advance in difficult playing conditions. Check the USGA Championship website for Sectional Qualifying results posted on Jun 6th.
Gateway Tour:
Dodge Kemmer continued his good form this year with a T2 finish at the latest Gateway tour event in Arizona. Check here to view the tournament leaderboard. Meanwhile in the Gateway Tour's California Series, Alex Aragon '01 fired a bogey-free round of 5 under par to finish T4 (results here). 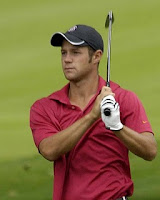 Kemmer (pictured) was kind enough to fill us in with the following exclusive update from his recent play and upcoming tournament schedule plans:
SUMMARY:
1. Made it thru US Open local (+2),
2. t2 at Gateway in Phoenix (-10),
3. next up: Canadian Tour debut (Victoria, BC), US Open sectional

Last week witnessed my final 'gearing up for summer' tournaments; I played the US Open local qualifier last Monday and my final Gateway Tour event of the year Wednesday thru Friday.
In the US Open local qualifier at Half Moon Bay, despite fighting wind, cold, bumpy greens, and having no warm-up, I was able to make some putts and shoot 73 (+2). This placed me in a tie for 2nd, enough to qualify me for another qualifier--the 'sectional' qualifier--which will give me a direct chance to earn a spot in the US Open. That will be help June 6th in Bremerton, WA (an hour from Seattle across Puget Sound), and is 36 holes, 1 day. I don't know how many guys are there or spots are available, as the USGA likes to keep you waiting (I haven't even gotten confirmation I am playing there...).

I then flew to Phoenix to play in Gateway #14 at McCormick Ranch Pine Course. I shot 68-69-69 (-10) and tied for 2nd. I made 19 birdies and 10 bogeys, every single one of which would be considered an 'unforced error' or 'stupid mistake'; those shots and decisions that make you want to pull a Tin Cup and play in with a 7 iron. These included 3-putts (3), deciding to hit to the front edge and proceeding to fly the green, hitting the first driver of the day after you decided to hit 3 iron on that hole, and convincing yourself that the 15 mph wind won't affect this particular shot, among others. However, 19 birdies in 54 holes is something to build on, and more importantly, my putting is back! (except for the 3-putts).

Next, I fly to Seattle, play my first Canadian Tour event at Uplands GC in Victoria, BC June2-5 (http://www.tcopen.ca/), then the sectional qualifier at Gold Mountain in Bremerton, WA June 6.
After that, I will be in Wichita for the Wichita Open Nationwide qualifier on June 13. I will fly in to Wichita a few days early and may fly out of KC after that is over (around the 15th or around the 20th).

Thank you Dodge and best wishes for the rest of the season...
GO CARDINAL !
Posted by prowegolf at 6:30 PM No comments: 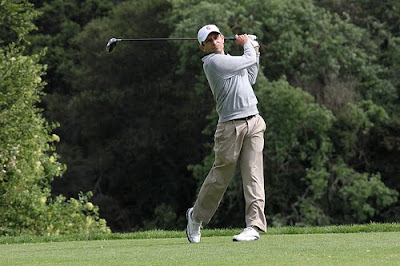 The Annual Alumni Matches were held Saturday, May 7th at the Stanford Golf Course. For the 2nd time in 3 years (but only 3rd in the last 20), the Alums were the victors. Frank "Sandy" Tatum (1942, pictured below) unofficially captained a spirited and vivacious Alumni squad. Dave Garcia (1996, pictured above) and Wade Nonnenberg (1976) fired 1 under par 69s on a blustery, difficult day to lead the way. Dave Baskins (1975) carded a 72, Coach Phil Rowe (2002) and Teddy Collins (2008) 73s and Coach Conrad Ray (1997) rounded out the top 6 Alumni scores with a 74. Seniors Graham Brockington and Freshmen Cameron Wilson lead the Varsity team with 72s and were followed by Wilson Bowen, Steve Ziegler, David Chung and Steven Kearney's 74s. 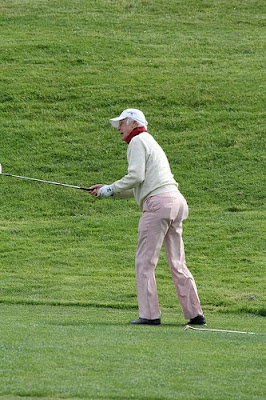 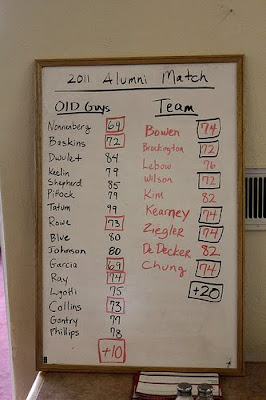 Posted by Pat Phillips at 6:13 PM No comments:

Cardinal Compete Across the Globe

Cardinal Alums are competing on professional tours across the globe this week.
Zack Miller (2007) and Joseph Bramlett (2010) are competing at the PGA Tour's Wells Fargo Championship. Both in their rookie season on the PGA Tour, Miller is 95th and Bramlett 191st on the Money List.
Will Yanagisawa (1995) is in Kuala Lumpur, Malaysia, site of this week's Asian Development Tour event. Last week, Yanagisawa jumped out of the gates fast and played steadily to finish T15th with scores of 68-73-71-72 (-4) in the Clearwater Classic in Ipoh, Malaysia.
Jim Seki (2003), Ron Won (2003) and Jordan Cox (2010) are competing at the Canadian Tour sponsored Mexican PGA Championship in Mazatlan, Mexico.
Rob Grube (2008) competed in the Willow Creek Open on the eGolf Professional Tour this week. Unfortunately, Grube missed the cut after posting 1 over par through two rounds.
Posted by Pat Phillips at 7:15 PM No comments: