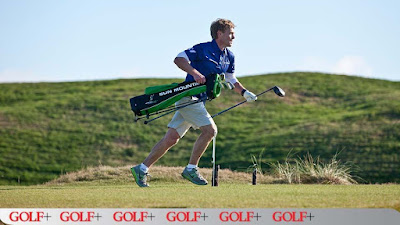 Andrew Yun - Life on the Road in May

I hope the third update of the monthly newsletter finds everyone doing well! Summer is here, and so I pray that everybody is having a good start to the season of summer sunshine and barbecue!

We started off the month with the United Leasing Championship in Evansville, Indiana. That update was mentioned previously in the April update. After a week off, which was spent back at home in Phoenix, I made my way to Greenville, South Carolina for the BMW Charity Pro-Am presented by Synnex Corporation. It was a unique format, where every professional teams up with an amateur. Therefore, there is a team leaderboard as well as the professional leaderboard. The first three days are played at three different courses throughout the Greenville area and then there is a cut, with the final round being played again at the host course, Thornblade Club. I was fortunate to have good company as I played with fellow professional Michael Hebert and his amateur partner Tim Sims. My partner was Terry O'Quinn who is an actor, most notably known for his prominent role as John Locke on the hit TV series Lost. We had a good time and although our team didn't make it to the final day, I played well enough to to sit in T-18th going into the last day.

My amateur partner Terry O'Quinn and I. 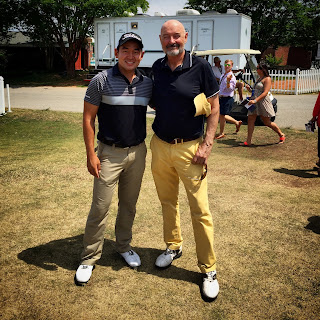 I shot a two-under par 70 the first day at Green Valley. The wind was blowing a bit the first nine holes, which made it tough to get it close to the hole. But a good stretch in the middle of the round turned the ship around. A second round 68 at the host course Thornblade was highlighted by a birdie at the last. A funny little tidbit was that I was drug tested after the round. It took me about 15 mins and a bottle of water to produce a sample. There were some older guys who were there for a few hours before they could go so I considered myself lucky. The third round at Lake Keowee was my best round of the tournament, where I shot a 6-under par 66. I again got off to a slow start before making three birdies to finish the front nine that propelled a solid back nine. Maybe it was because I wasn't having as much fun the last day, but I shot an even par 72 to finish at T-34th. Maybe there also was some added pressure of playing on my birthday that last day. Overall, a very fun week in which I got to meet a lot of great people.

The 18th at Thornblade 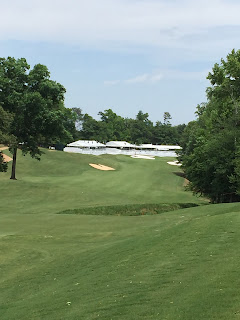 We had a week off after that and I got to spend some time working on the game. I found a personal trainer in Scottsdale at Premier Fitness Systems with Brandon Harris. I want to do everything possible to perform to my highest abilities and after doing some research, I felt that this was the place where I could grow the most. I am excited to get my butt into shape, especially as the heavy stretch of tournament golf gets closer!

The next tournament was the Rex Hospital Open in Raleigh, North Carolina. The course. TPC Wakefield Plantation,  is a traditional layout with trees and heather lining the fairways and soft, but smooth greens. The birdies were there to be had, but fairways were a premium in order to attack the pins with the soft conditions. A solid first round two-under par 69 left me in a good position going into Friday. However, a second round six-over par 77 left me on the outside looking in. Nothing went well Friday, which was really strange. But I'm always finding ways to learn and grow and this was another one of those experiences.

The second tournament was the Greater Dallas Open in Lewisville, Texas, just above Dallas. We were playing at the Lakes at Castle Hills. If you were following the weather, Dallas had major floods the weeks before. The golf course was literally under water just the previous week. Therefore, the conditions were super soft and the ball was being played lift, clean and place in the fairways. The greens were amazing though. The golf course is big and wide and combine that with soft conditions equals prime for good scoring. Rounds of 71-71 had me missing the cut. The cut was extremely low, coming in at 6 under par. Too many missed tee shots to the right cost me some shots. But more than that, I really believed that I learned the hard way of what letting go really entails. I know I have to make a commitment not after I make the shot, but before I even play the round to have fun and enjoy the walk on the golf course. It's so easy to be hard on yourself, but it's difficult to be your best friend when golf is your worst enemy. That is what a champion is made out of. I had the pleasure of playing with Patton Kizzire, the number one guy on the money list. I learned that a solid wedge game goes far, and I knew then that I have to tighten up my wedge game.

This week we have the Cleveland Open in Cleveland, Ohio. Hopefully the weather is good and the golf is even better. Always learning, always growing, always believing. I may have had a rough stretch and it might get even rougher. But I am excited for this next opportunity and going to work hard to get better each and every day. Happy early Father's Day to all the fathers out there! God bless!
Posted by Unknown at 9:10 AM No comments: