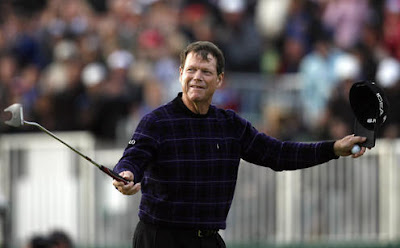 Hall of Famer Tom Watson ('71) makes history at age 59 by finishing runner-up at Turnberry in the British Open. In a tournament that captured the world's interest like few other sporting events ever have, Tom stood on the precipice of winning his 6th British Open, needing a par on the 72nd hole to complete what he called was a "spiritual" experience.

After hitting a perfect hybrid tee shot and a flushed 8-iron on 18, the 2nd shot bounded over the green into a tight lie. Putting from off the green, Tom was unable to make the winning putt and he settled for 2nd place after a 4-hole playoff won by Stewart Cink.

Tom's historic effort will no doubt go down in sporting annals as one of the most dramatic and amazing accomplishments as he completed the tournament with grace and dignity fighting to the end, bringing back memories of the Watson of old as the finest links golfer of the 20th century.

He has made all Stanford grads and golfers everywhere proud. A collection of articles about Tom's magical week will be added here in the next few day.

The official Open Championship website can be found here including video and audio of Tom's experience as well as others speaking about Tom's tournament.
Posted by Bob Stevens at 8:07 AM No comments: