It's that time again for the monthly update, and this one being for the month of July. I hope this email finds everyone doing well!

In the last email, I left off at the Albertsons Boise Open. The course we played the tournament at is called Hillcrest Country Club, and it's a very short and flat golf course with the very classic look. Small greens that are mainly contoured from the back to front and all slightly elevated. Boise has some slight elevation - about 2,700 ft - and combine the warm weather equates to the ball going further. My caddie and I figured that the ball went about 5% further in the morning when there's a bit more humidity and 7% in the afternoon. The short course with little rough, and soft, smooth greens were a recipe for low scores.

Rounds of 69 and 68 left me missing the cut by one shot. Overall, I played really solid. A few wayward drives led to some bogeys, but ultimately it was the putter that let me down that week. The second round, I started off by hitting it OB, and then made birdie on my second ball to salvage a bogey. A few birdies and I was at 3 under for the day after the 12th hole. A drivable par 4 and an easily reachable par 5 were still to come. But after hitting my drive on the fringe on the drivable par 4, I did not get up and down. And after a perfect drive down the fairway on the par 5, I fanned a 4 iron to the right and did not get up and down for birdie. Those missed opportunities ultimately led to missing the cut, but it was a great experience because I am learning from those mistakes. 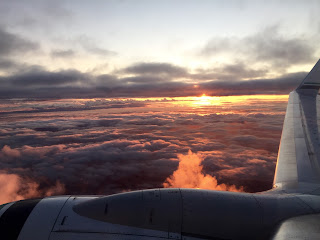 Sunset from the plane going from Boise to San Jose, CA. 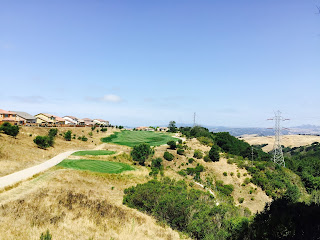 A view down the fairway of the 2nd hole from the tee box.

This picture shows a bit of the changes in elevation we experience just walking the course. 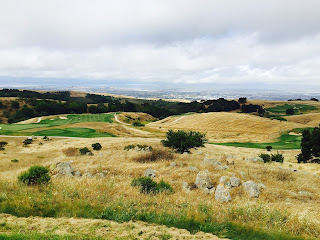 Rounds of 69-69-68-67 resulted in a tie for 18th. A solid tournament overall, which I would have to thank my parents for because they were cheering me on that week. I hit the ball well the first two days, but couldn't get the putts to drop. The difference on the third day was completely night and day. I couldn't keep my tee shots inside the state of California, but the putter was extremely hot. Twenty-two putts for the day. And yet I could only manage a two-under par 68. Golf is definitely a funny game. The last day was extremely solid from tee to green. I was four under par going into the last hole, a reachable par 5. A slightly wayward drive left me just in the fescue grass. It was a good enough lie to advance it down the fairway and set up a wedge shot for the 3rd shot. However, I could drop it because I was standing on the cart path and get a better lie, possibly giving me the chance to reach the green. I was greedy and decided to drop it. My drop rolled deep into the fescue grass and I managed to make bogey from there. An ugly finish to an otherwise solid performance. I learned not to be too greedy and take my medicine when needed. I also need to practice the art of the drop. 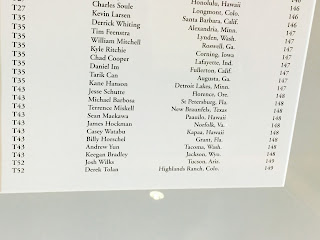 There was a week off before the next event in Salt Lake City, Utah. I decided to go home to Seattle to spend time with family and friends and take a couple lessons from my coach, Joe Thiel. While up there, I played at Gold Mountain Golf Course, site of the 2006 USGA Public Links, where I qualified for my first ever USGA event. There was a picture of the stroke play portion of the scores in the clubhouse. Some recognizable names next to mine: a FedEx Cup champion and PGA Championship major winner.

Next up was the Utah Championship presented by Zions Bank. This course was a new one on tour, and it's one of the longest courses we play on tour at 7,700 yards with a lot of forced carries. But being in Utah, the ball went a long way due to the elevation of about 4,400 ft. I was playing about 3% further in the morning and 7% in the afternoon. It had a few interesting holes, but overall a very solid course. The wind plays a definite factor, especially in the afternoon. The greens become further and much bumpier because of all the footprints. One must take advantage of playing in the morning when the greens are soft and smooth.

The 18th at Thanksgiving Point. 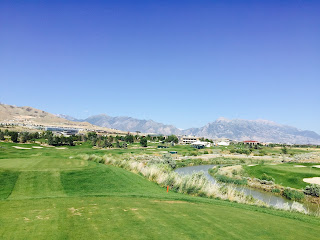 I ended up missing the cut by one shot shooting rounds of 72-72. I was thinking the cut was going to be at 2-under par, and I headed to the last at one under. Thinking I needed birdie, I split the fairway with a 7-wood. With only a sand wedge left, I missed the green to the right. My chip then ran past the hole about three and a half feet. Maybe I just lost my focus after missing the chip, but I ended up missing that short putt.

Next time, I'm not going to think about the cut and just play the game. Play till I finish, and whatever happens, happens. I was playing to make the cut, not to play my best. I'm sure my best would have been good enough. But again, lessons are learned through the mistakes and failures we make. That's only going to make me better and stronger.

Last week, we were in Kansas City for the Digital Ally Open. The golf course, Nicklaus Golf Club at Lionsgate, is a great Nicklaus design course. Generous fairways and soft greens makes for a lot of birdies. A first round 6-under par 65 was the start I needed. A change in putter grip to the conventional style - from crosshanded - seemed to work as I made a lot of 15 footers for birdies. Rounds of 69-69-69 to finish the tournament led to a T-43rd. Some mental mistakes from frustration led to very little momentum and a lot more pars than I would have liked.

It is a long season, but we only have three tournaments left in the regular season. Currently, I am 40th on the money list. Top 25 after the season are guaranteed their PGA Tour cards. This week I am in Springfield, Missouri for the Price Cutter Charity Championship. Next week we are in Knoxville, Tennessee for the News Sentinel Open. And the following week we finish the regular season in Portland for the WinCo Foods Portland Open at famed Pumpkin Ridge Golf Club.

Always learning, always growing, always believing. It is much easier said than done, but I want to make it a goal to try my best and have the best attitude possible as I finish the regular season. I can only control that much. If I do that, then I can live with the results.

This month's newsletter was a bit long. Thanks for reading and I hope everybody has a fantastic August!