After a summer of mostly disappointing results, things started to fall into place in September.  I played two events, never shot over par, was in the 60s for 6 of the 8 rounds, and was 24-under total!  First was the European Tour's M2M Russian Open played outside Moscow, where I shot 71-69-68-68 for 8-under total and tied for 17th place.  Two weeks later I played in first stage of European Tour Q-school in Austria near Vienna.  There I shot 68-65-71-68 for 16-under and a four-shot victory!  Of course its officially only medalist honors as its Qschool, but I'm still calling it a win!

With that I advance to 2nd stage in Europe to be played in Spain the first week of November with Final Stage the following week, also in Spain.  I am also slated to play Web.com Qschool this fall; that 1st stage is October 20-23 in Dayton, NV.  Unfortunately, if I earn a spot in Final Stage of the European Qschool, I will be unable to play in 2nd stage of Web.com Qschool as the dates conflict by a mere 12 hours.  They must do that on purpose but don't ask me why.

Scores for Dayton Valley should be available HERE

Thanks for the support! 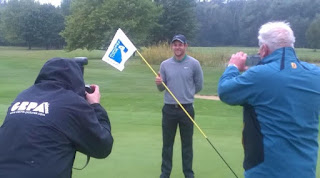